Brad Pitt, 56, puts on a funky display in an eccentric jumper with tattered jeans as he beams while emerging from his LA art studio

By Milly Vincent For Mailonline

He is used to gracing the red carpet in a series of sleek ensembles.

Yet Brad Pitt, 56, was going for a more edgy look on Friday as he was seen departing his art studio in Beverly Hills while going for a kooky style.

Wearing an ombre green sweater and his favourite pair of slouchy jeans, the film star cut a casual figure after spending hours in the studio where he sculpts. 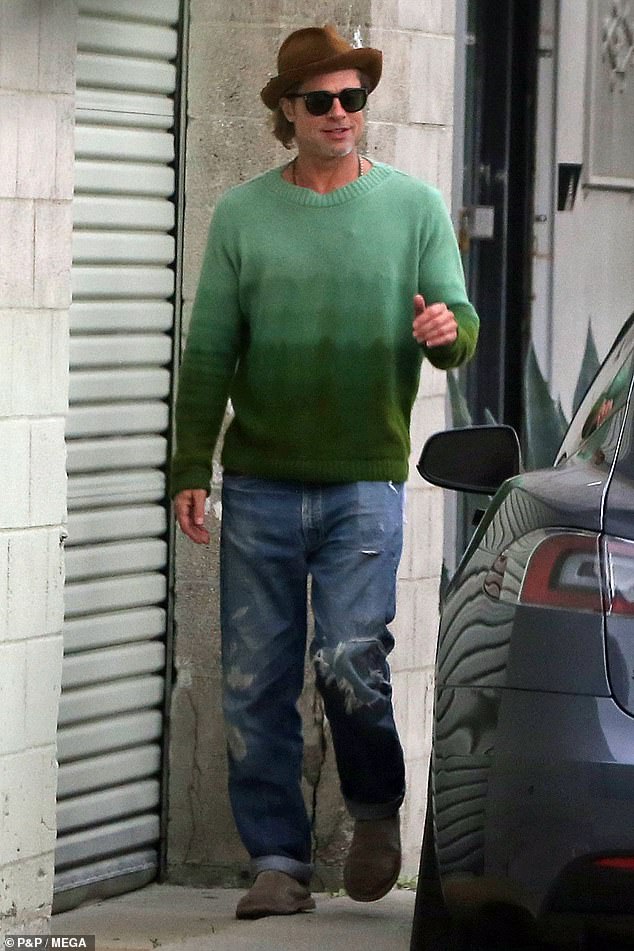 Retreat to the studio: Brad Pitt, 56, was going for an edgy ensemble on Friday as he was seen departing his art studio in Beverly Hills while going for a kooky look

Brad first retreated to the art studio in 2017, locking himself away for long and lonely nights to channel his heartbreak over his divorce from Angelina Jolie.

He began working on sculptures under the direction of his friend, British artist Thomas Houseago, but has not revealed them to the public.

Now finished with the press surrounding his latest role in Once Upon A Time In Hollywood Brad has once again retreated to the studio to indulge his passion.

His outing comes after the Fight Club star found himself at the centre of a media storm following last week’s Golden Globes when he was spotted heading to the same after-party as ex-wife Jennifer Aniston. 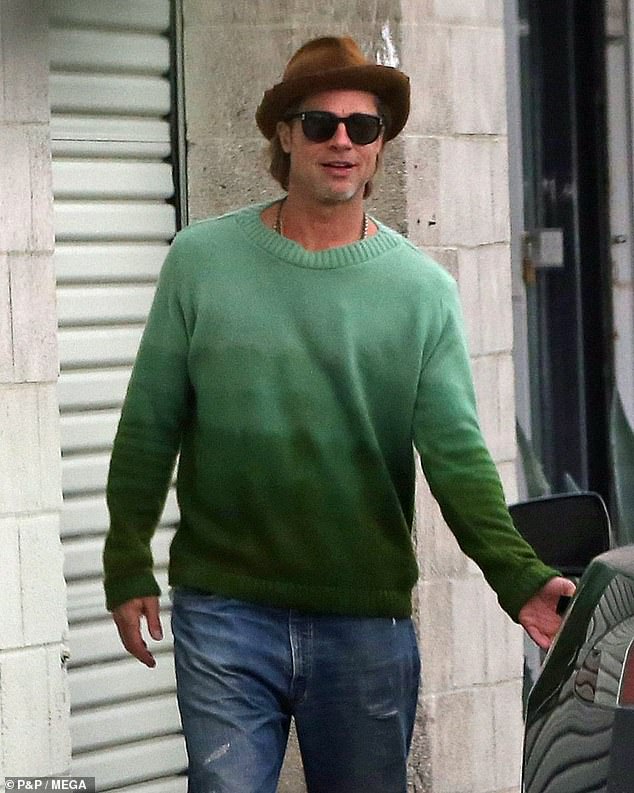 Away from the drama: The budding artist spent up 15 hours a day in the studio working until the early hours of the morning during his second divorce

The pair were seen heading to the CAA after-party at the Sunset Tower Hotel following the 77th annual Golden Globes at The Beverly Hilton Hotel hours before.

During his appearance on the red carpet ahead of his victorious stint at the show where he won Best Actor in a supporting role in Once Upon A Time In Hollywood, Brad, 56, branded Jennifer, 50, a ‘really good friend’.

Jennifer arrived at the bash hosted by talent agency CAA (Creative Artists Industry) alongside jewellery designer and good pal Jennifer Meyer, with whom she shared a tender hug before hitting the bash. 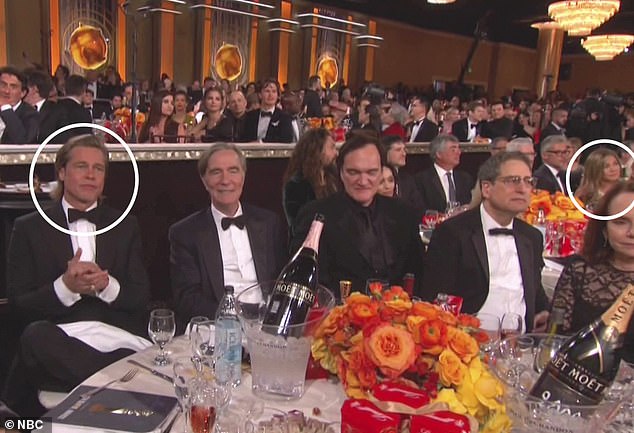 Sitting pretty: Inside the Golden Globes, the pair had been seen sitting just feet away from one another, with Brad and Jennifer placed on neighbouring tables 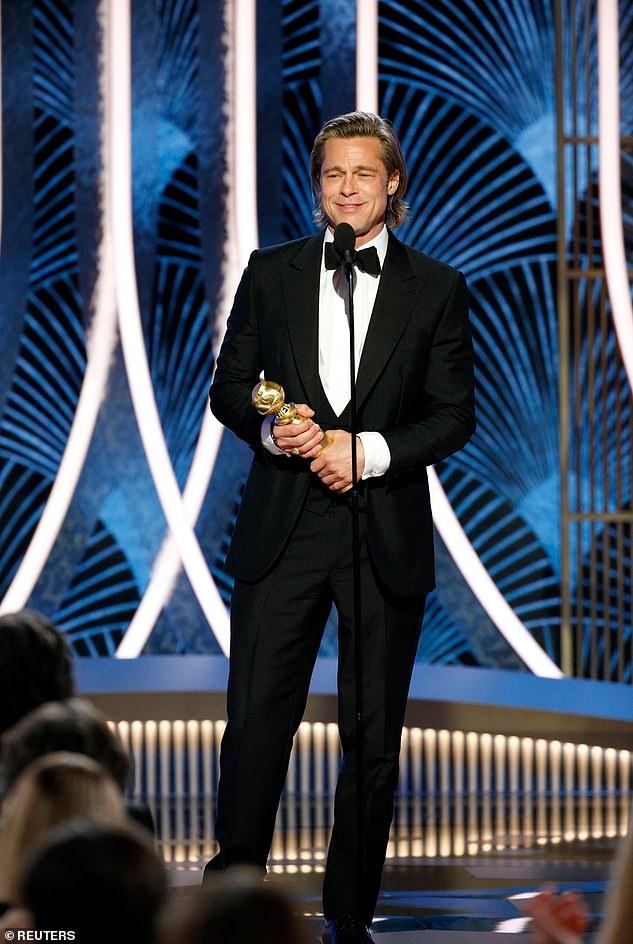 On his own: In his speech at the Golden Globes he joked about attending alone, saying: ‘I wanted to bring my mom, but I couldn’t because anyone I stand next to they say I’m dating. It’d just be awkward’

Shortly after, Brad made a solo arrival at the event while still looking sharp in a tuxedo, following his sweet tribute to his ex, despite their bitter split.

As he took the stage, Brad revealed his relationship with Jennifer is nothing but amicable as he called her a ‘good friend’.

Jennifer and Brad were married from 2000 to 2005, splitting after Brad fell for his Mr. & Mrs. Smith co-star Angelina Jolie.

Attending the Golden Globes no doubt brought back memories for the exes, who famously attended the ceremony as a married couple back in 2002.

Separate arrivals: Brad called ex-wife Jennifer his ‘good friend’ as he was asked about bumping into her on the red carpet 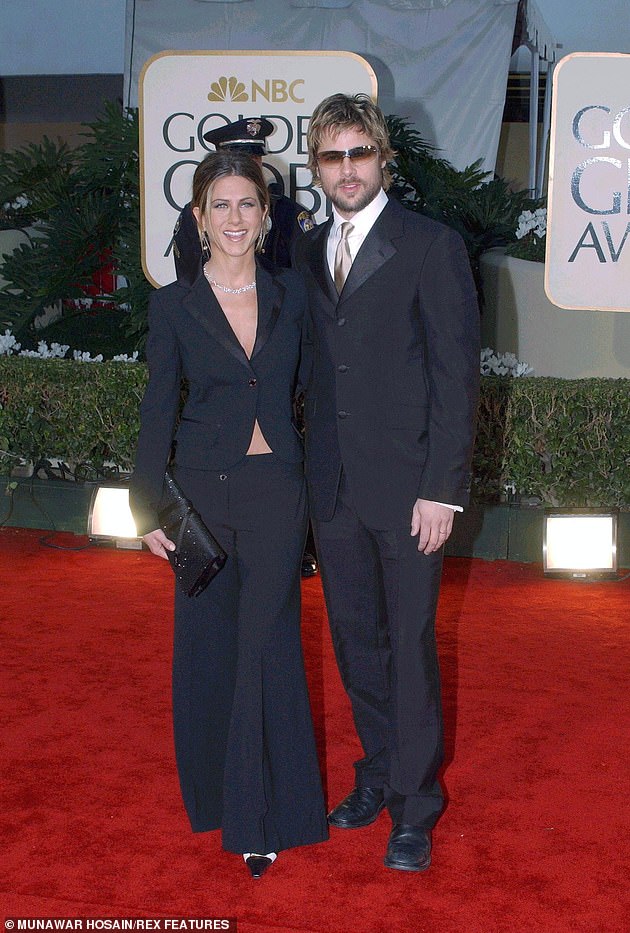 Throwback: Attending the Golden Globes no doubt brought back memories for the exes, who had attended the ceremony as a married couple back in 2002 – three years before their split

Mahira Khan declared the film 'superstar' as its most special